Who do YOU want to EMULATE?

Who do you want to be like? As a skateboarder there are a few guys I have always idolized. I am amazed at the things they can do and wish I had the same skills they do. You likely have your own people to look up to. But beyond their skills or material things, who has goals, ambitions, and most importantly, the characteristics, that you would also like to have?

Sadly, we all know people who have fame, money,  or abilities that we’d like to have –  but not their character. So forget about the stuff and look at the heart. Who do you want to be like?

I’ve run into people I consider heroes. Many years ago I was introduced to a lady in Mexico who had taken in fifty-five orphans.  She cared for them.  She made sure they were fed. She wasn’t doing it for fame or to become part of a famous organization.  She simply did it because she saw a need and decided that she had to do something.

I saw something in her I wish I had. I wanted to become like her. It may not mean I want to move to Mexico, but I at least want to be willing to help others. To be someone who loves extraordinarily.

I am writing this while in the Dominican Republic working in several Haitian and Dominican towns and villages. What is evident is who is here to help those in need. It is primarily people with strong personal belief in Jesus.

This is not to say everyone who is helping the poor are people of faith. I know many atheist, agnostic, and people of other religions who are fighting and working on the behalf of others. However, around the entire world are millions of people who go to where no one else is going. People who sacrifice beyond what anyone could ever deem normal. I believe one of the biggest common factors you will find in them is they have a strong faith in Jesus Christ. It is because faith in Jesus leads us somewhere.

This is what makes faith beautiful. It is seeing Jesus lived out in real life. It is hope being given to those who are hopeless. It is a meal given to the hungry. It is hurt finding healing. It is living lives in bondage to drugs, alcohol, and addiction being set free. This is where faith and belief in Jesus will take you. To be an agent of change in this world. You can literally become part of the His Kingdom comes to earth.

Personally, no. This is one reason why I believe God is so real. While there may be many who will argue against the existence of God. Many of whom I highly respect. It does not mean I want to emulate their life. However, every time I run into someone who has been completely transformed by Jesus, I see something beautiful in their character. It is evident Jesus is there.

I do not just want to debate and argue. I want to believe in something that causes me to fight for freedom, to take up the cause of the oppressed, to make a positive difference in the lives of others.

My goal is not to prove or disprove God. He should be able to take care of Himself. Or to just debate and argue with others about theology and points of views. Instead I want to ask myself and others, ‘If your belief isn’t taking you somewhere, is it really a belief worth having?’ So in the end we have to ask ourselves who do we want to become like? Personally I want to become like those willing to give. To go. To sacrifice. 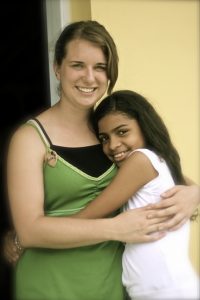 Meet Anna.  This young adult visited the Dominican Republic several years on a humanitarian trip with Live Different. While in the Sosua area she saw how young girls were entering into prostitution to survive.

Everyone who sees how these young people are abused and used is upset about the situation. Everyone, says someone should do something. However, heroes are different. They decide to be that ‘Someone.’

At the age of twenty three Anna began a new journey. She left Kelowna, British Columbia and moved to Sosua, in the Dominican Republic. There she started the Empower Girls Program, as part of Servant’s Heart Ministries. This program was designed to give girls choices and life skills needed to prevent them from entering prostitution.

She gave a stage of her life to serve the people of the Dominican Republic. She is a modern day hero. It is people like Anna who show how real the transforming power of Christ truly is. It changes us. It moves us. It invites us. Calls us. Compels us to be His hands and feet. To be a voice of hope, healing, and peace. To be one who rescues the lost, hurting, and broken.

Who do you want to Emulate? For me, it is people like Anna.

– This is a post from the Before You Say Goodbye Book

Dave Sawler—the writer behind this blog

Getting Active & Raising Money Through HIKE4CBKIDS