Slowing Down – The key to moving forward?

For most of my life I have been involved with various extreme sports. If there is something I love, it is to go fast. Whether it has been mountain biking, snowboarding, four wheeling, or being on my motorbike, there is a personal enjoyment in going fast. This has led to a few injuries in my life, but I wouldn’t take them back. However, as I have gotten older it seems I take fewer risks. We do gain some wisdom from life’s lessons as we age.

Sometimes we learn more in a moment than through months of reading, classes, or sessions. Two winters ago I had one of those unexpected moments where God spoke something into my life through my own children.

My youngest, Amanda, decided that it was time she learned how to snowboard. I had been taking her older brothers for years and now she wanted to join in. What you need to know though is that snowboarding has been a passion of mine for over twenty years.  I started skateboarding when I was seventeen. Then two years later started snowboarding and have never quit. There are few things as enjoyable in life to me, as carving down a mountain at high speeds. I think I was made to go fast. 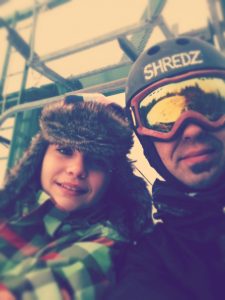 If there is something that annoys me and even drives me crazy it is going slow. When I come up behind a car going below the speed limit I admit I wonder, ‘what is wrong with this person?’ I was never made to stay still.

The first five days I took Amanda snowboarding was painful. For her, because she kept falling, but also for me because I never got to snowboard. I mean I was on one, but I never once got to go fast, I never once enjoyed the speed. Instead, every ten feet I would pick her up, give her some instructions, a push, and waited for her to fall again.

On this particular day I was sitting in the snow waiting for Amanda to catch up. We were on the trail right beside the snowboard park. I was watching different young people go over the jumps and slide on the rails. As I was watching, my middle son Jordan came through the crowd, went over a jump, and was gone from view as quickly as he had come. He was going fast.

It was in this moment a realization of a deep truth hit me. There were years earlier that I hardly had a chance to go fast and snowboard either. It was during these years when I was teaching my boys how to snowboard. Now here I was sitting on a hill seeing him fly by me just as fast as I could go. Today, we all get to the bottom in a reasonable amount of time, and fall only occasionally. Today we can all go fast. If I had never slowed down though I would have been the only one going fast. I would get to the bottom, but I would be all alone, with my children watching from the sidelines.

When it comes to those you lead, you to ask yourself this question, ‘Who am I slowing down for?’ My prayer for you is that you will find several people to invest in.

Dave Sawler—the writer behind this blog

Getting Active & Raising Money Through HIKE4CBKIDS